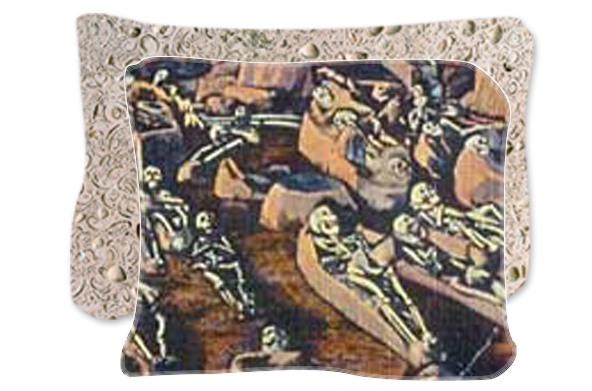 A few years after purchasing the Ponce de Leon’s Fountain of Youth in 1927, Mr. Walter Fraser elected to plant some citrus trees in the southern part of the area. In 1934, a gardener was planting orange trees when he discovered a skeleton. The police were called, and it was quickly established that the remains were that of an aboriginal Native American. Further research by the Smithsonian Institution revealed that the entire area was covered with the graves of the first Christianized Native American burials in the United States. Some estimates place the number of burials at over 4,000. Over forty years later, the pattern of burials revealed the location of the 1587 Franciscan Mission of Nombre de Dios, the First Christian Mission in the United States – right here at Ponce de Leon’s Fountain of Youth Archaeological Park!

Over time, a large number of Timucua burials were exposed in the Park, and the “Indian Burial Ground” became a part of the memories of tens of thousands of Florida schoolchildren. As the years passed, increasing sensitivity to the customs and culture of Native Americans prompted the December, 1991 reinterment of the remains, together with a full solemn Catholic Mass.

“St. Augustine, Florida is the first area in the continental United States where a European culture successfully blended with a native aboriginal culture over time, creating a unique fusion of cultures – Spanish and Timucua at first, and then African, French, English, Irish and Southeastern aboriginal American.