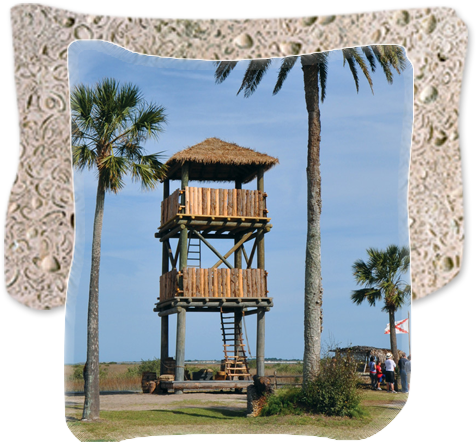 Standing like sentinels of the Northeast Florida coast, the Spanish watchtowers of St. Augustine helped sentries see farther to discover threats earlier. When St. Augustine was founded in September of 1565, the spyglass had yet to be invented, so only the sharpest-eyed men were hand-picked for watchtower duty. The system worked well, but proved to be the town’s undoing in June of 1568, when Sir Francis Drake with two thousand men and 42 ships spotted a light in the coastal St. Augustine watchtower. Had the watchtower not had a light burning, Drake might have missed the town entirely. The rest is history, for Drake and his men sacked, looted and burned the entire town and wooden fort in an epic raid, taking two thousands pounds sterling in silver from the burning ruins. The date of the Raid was June 6, 1586, and is commemorated each June in St. Augustine to this day.

An Italian mapmaker named Baptiste Boazio who worked in London made a map of the attack, and this is considered to be the first map depicting the layout of the town of St. Augustine.