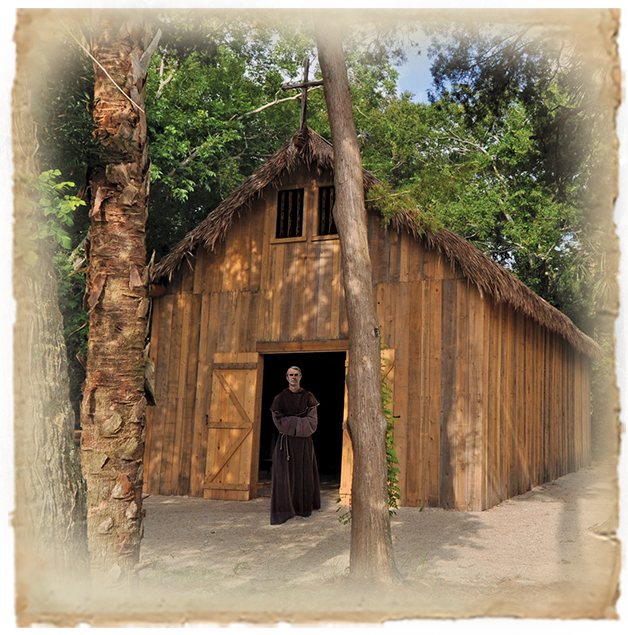 In 1587, Franciscan friars constructed the first mission in the continental United States right here on the grounds of the Fountain of Youth. The location of this Mission, however, was a mystery that revealed itself little by little. It began in 1934, when a gardener planting an orange tree discovered a skeleton, which proved to be a Timucuan. Over time, a large number of Timucua burials were exposed in the Park, and the pattern and position of their burials revealed the true location of the 1587 Mission of Nombre de Dios.

To reconstruct the Mission, a new archaeologically appropriate site was chosen. The structure was built using historically correct methods wherever possible using local cypress, which was known to 16th century Spaniards to be durable and resistant to wood-eating insects. The Mission church features a choir loft and rustic altar, and uses a palm thatch roof. The floor is crushed coquina, as is the area around the church.

Standing in the reconstructed church, you will smell the cypress beams and planking, palm thatch and salt air as you gaze at the beautiful open-beamed structure. Let yourself be transported back to the first days of Christianity in the United States.

“…These first Christian Indians attended Mass in the town of St. Augustine until after 1587, when the first Franciscan mission doctrina was established at the Nombre de Dios, and was given the same name. Franciscan friar Antonio de Escobedo was assigned there, and helped build the first Nombre de Dios mission church. – FLORIDA MUSEUM OF NATURAL HISTORY