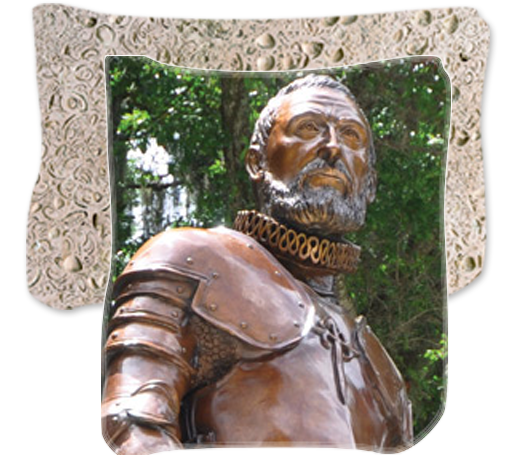 On Tuesday, August 25, the Fraser family, owners of Ponce de Leon’s Fountain of Youth Archaeological Park, unveiled a new pocket park centered around a heroic-scale statue of Pedro Menéndez de Avilés, founder of St. Augustine. Lushly landscaped, the pocket park will provide an atmosphere where the public can “relax, rejuvenate, and reflect”, according to John W. Fraser, Managing Director of the Fountain of Youth. The centerpiece of this area is the statue of Pedro Menendez. Sculpted by local renaissance man Chad Light, the cast bronze statue is six feet tall, weighs nearly 400 pounds and is finished in a custom French brown patina that brings out the statue’s fine details. The figure is positioned so that Menendez appears to be surveying his St. Augustine Settlement of 1565. The work of art stands atop a coquina-faced concrete pedestal with a bronze plaque detailing Menendez’s founding of America’s First Colony on the grounds of what is now the Fountain of Youth Archaeological Park. Surrounding the statue is a circular coquina tabby area which will host guests in afternoon shade. A semicircle of flags portraying the five major historical eras of St. Augustine curve behind the statue area. Benches will soon be installed.

No admittance fee is required to visit the Menéndez pocket park and statue. Park accessible from 9am until 6 pm daily.