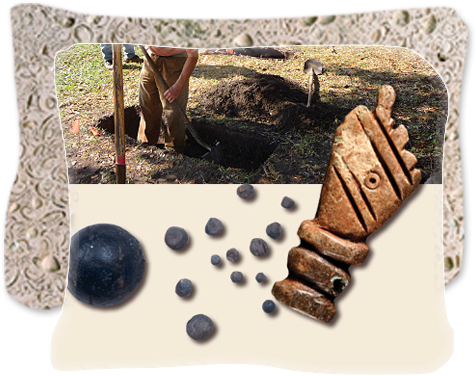 We dig the past You will too

Archaeologists have been excavating at Ponce de Leon’s Fountain of Youth Archaeological Park for over 80 years, and in that time the discoveries have rewritten history textbooks time and time again. Since 1934, archaeologists have made a long list of major finds at the Park, and excavations continue to this day.

The major contributor to the work is Dr. Kathleen Deagan, Distinguished Research Curator Emeritus, University of Florida Museum of Natural History, who generally digs at the Park in the spring months. Her major area of excavation is in the first Settlement of St. Augustine, located on the eastern end of the Park property. It was here that Pedro Menendez de Aviles first landed in the area and set up the settlement in the Timucua village of Seloy nearly 500 years ago.

The Fountain of Youth Park site is best known for its 16th Century Spanish associations, which include the original 1565-66 settlement of St. Augustine, as well as the initial site of the Franciscan Nombre de Dios mission church, established in 1587. Before the arrival of Europeans, however, the site had been occupied for more than 1,000 years by the Timucuan Indians who occupied much of Northeast Florida. – FLORIDA MUSEUM OF NATURAL HISTORY